97% of people aged 50 and up own a cell phone. A huge majority of this demographic owns a smartphone, yet service for these devices can be expensive, costing upwards of $70 per month. Nobody wants to spend more money than they have to, and budgeting starts with making sure we aren't spending money on items we don't require. We found the most important factors to consider for when picking a cell phone plan so you can avoid overspending and know what you need from your provider. 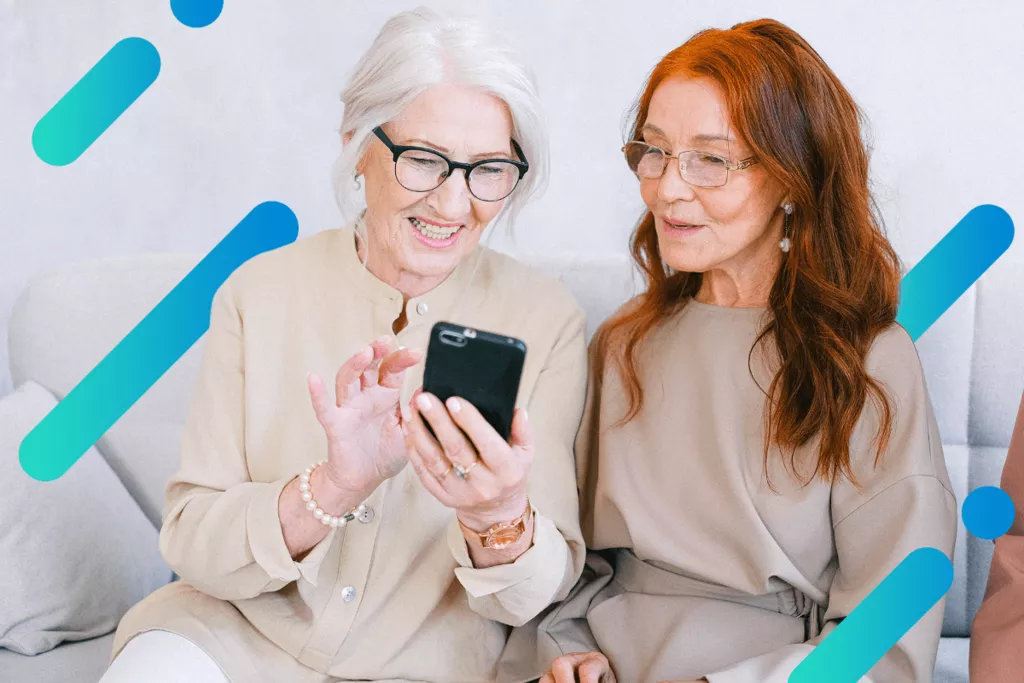 What is the Best Cell Phone Plan for Seniors?

The finest senior cell phone plans strike an ideal balance. They're cost-effective, include essential features (talk/text/data), and, at their best, can incorporate senior-specific features that improve autonomy, independence, safety, and even protect long-term health.

Comparing cell phone plans for seniors on a side-by-side basis can be difficult. When you cut through the hoopla, you'll find that most cell phone plans, whether they're designed for seniors or not, are built around three key services: minutes, text, and data. Below find a comparison of a few plan options.

The initial component of every phone plan is a certain number of talking minutes. Are you a talker who likes to have long conversations with friends or family in other states? The answer will help you determine a good starting point for selecting a plan.

People who aren't big talkers may not require a plan with a large number of minutes included (let alone unlimited talk). If you only contact one or two people to check in regularly, paying a hefty monthly premium for a plan with thousands of minutes may not make sense. A prepaid or pay-as-you-go plan may cost less per month than a regular plan with lots of minutes if you don't talk often.

The world appears to be divided between texters and non-texters, and mobile operators' pricing reflects this division. Texting was challenging in the early days of cell phones. As a result, texting didn't fully take off until mobile phone hardware made full keyboards convenient to use. Smartphones, sophisticated interfaces that make it harder to misspell letters, autocorrect, and even voice-to-text technology all help to make texting quick, simple, and easy. Text messages are sent twice as frequently as phone calls are made in the United States.

Even if you aren't a regular texter, a plan that includes at least a few texts per month will allow you to keep up with the grandkids without worrying about being nickeled and dimed on your monthly cost. Additionally, texts are a convenient way to receive notifications from the pharmacy when a prescription is ready to be picked up, as well as appointment reminders.

If the primary user of the phone is addicted to data-hungry apps like Facebook, YouTube, and Netflix and isn't always near a reliable WiFi network, you’ll require a plan with a large data allowance. That's because going over your permitted data can add a lot of money to your monthly phone bill.

What is the Least Expensive Cell Phone Plan for Seniors?

The least expensive cell phone plan for seniors depends on what you are looking for from your provider. We’ve broken down several types of plans below to make it easier to understand what different types of plans offer.

It is possible to get a cell phone and pay as you go without plans. Prepaid phones are more common than people think. A surprising percentage of consumers over 55 pick phones without a monthly commitment, opting to buy voice, text, and data on a per-month basis with the ability to transfer carriers without penalty.

Certain large national carriers provide structured discounts and multi-line offers to customers over 55. But there's always the fine print; if you live alone or have no one with whom to "split" the cost of a second line, a cheap two-line plan won’t save you much after all. Furthermore, some cheap plans are only available in one or two locations, or Internet speed is throttled.

Keeping it all in the family is one of the more cost-effective methods to get past constraints on minutes, data, and texts while also spreading those benefits among multiple phones. Some carriers even sweeten the deal by covering more than just your phone plan, such as covering the cost of your Netflix subscription. Family plans offer a simple, budget-friendly solution for family caregivers to keep cell phone plans for seniors centered and organized, with the option for as few as two and as many as four people to share one account and all of its texting, calling, and data.

A la carte cell phone service is gaining popularity among daring consumers, and not every senior is behind the curve. Flexible plan providers allow users to choose, modify, and dictate their terms each month. Do you have no intention of using thousands of minutes or large amounts of data? Then come up with your own strategy, on your own terms. You won't get all of the features, perks, and health and safety extras that a plan tailored for seniors would, but you also won't be tied to the two-year, unbreakable, long-term contract that a regular carrier would provide.

Pay-as-you-go phones offer the same features as traditional cell phones, but without the need for long-term commitments or overage fees for minutes used beyond your monthly plan. You can still make calls and send texts to friends and family until your minutes run out, depending on the phone's functionality.

Optimum offers several plans that would make great plans for seniors, offering flexibility and features made specifically with older adults in mind. Check out a full breakdown of Optimum Mobile's Plans.

Overall, the best cell phone plan for seniors depends on what you’re looking for. Hopefully our guide provided you with the proper guidance and information to make the right choice.

Are you getting everything you need from your mobile plan?