Star Wars Day is May 4th. Celebrate with Optimum and learn some fun facts, activities with your kids or watch the movies & new TV series! May the Force Be with You!

May The Fourth Be With You! 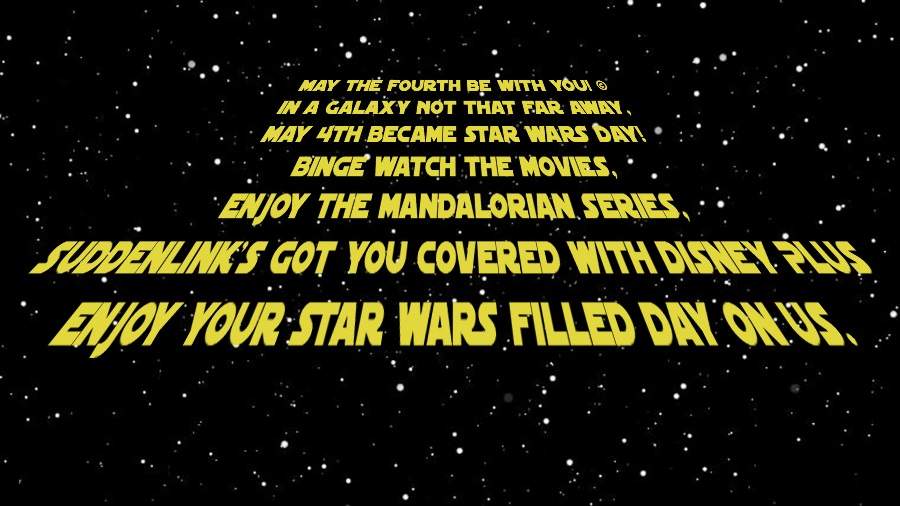 May 4th is Star Wars Day!

Every year, May 4th is celebrated by Star Wars fans worldwide. The iconic sci-fi franchise began as a movie trilogy, but has since become a media phenomenon, spawning two more movie trilogies, standalone movies, many video games, various television series (with more on the way!), and even an infamous Christmas special.

The Origin of Star Wars Day, Not Too Long Ago in a Galaxy Pretty Nearby

May the Fourth Be With You – a play on the famous Jedi phrase, “May the Force be with you” – was first popularized in 1979 when, on May 4th, Margaret Thatcher first took office as the British Prime Minister and members of her Conservative Party published a full-page ad stating, “May The Fourth Be With You, Maggie. Congratulations.” However, it wasn’t until 2011 that the first large, organized Star Wars May the Fourth event took place. Fans gathered in Toronto to watch movies, play games, and show off their costumes. Disney’s purchase of Lucasfilm just a year later in 2012 helped solidify the pun as an official worldwide event, complete with logos, a cosplay day at Disney theme parks, merchandising deals, and much more. In 2019, California legislature even voted to officially deem May 4th as Star Wars Day.

When it comes to celebrating May the Fourth, there’s no shortage of fun activities. From meetups to movie marathons to new product releases, there’s something for every type of fan. Need some inspiration? The official Star Wars website has you covered. (We’ve been eyeing those Bantha Blue Butter Sandwich Cookies.) Want a handy list for a movie marathon but is the thought of researching watch orders turning you to the dark side? We got you:

There are only so many hours in a single day in May, but that doesn’t mean your marathon can’t continue beyond the event. If you want a little break from Luke, sprinkle in some of your favorite Mandalorian episodes streaming on Disney+. (We’re partial to the episode with, yep, those Bantha Blue cookies.)

If you’ve always felt more attuned with, say, conquering the Galactic Senate instead of bullseyeing womp rats, Star Wars Day hasn’t forgotten about the other side of the Force either. Your time comes on May 5th, dubbed Revenge of the Fifth, where the villains (unless you share Anakin’s point of view, of course) are celebrated.